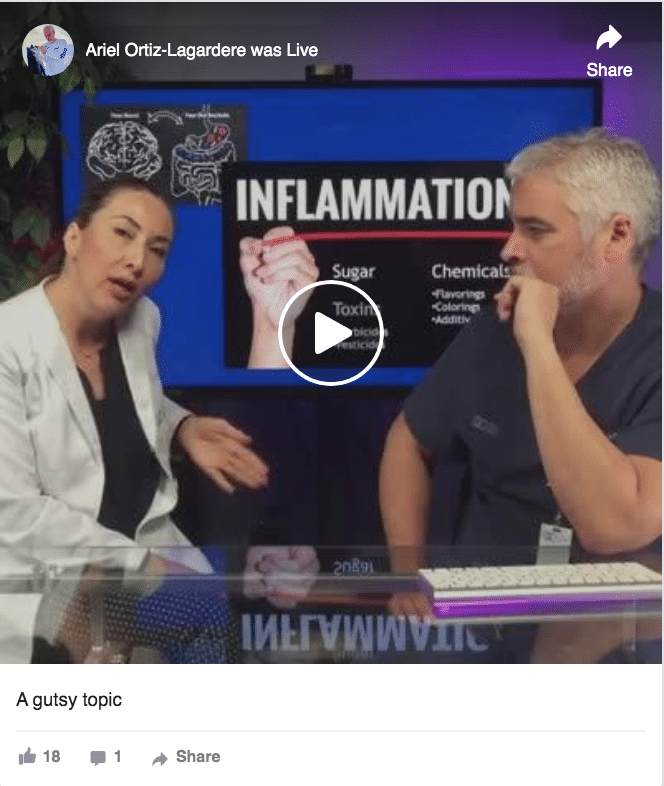 Check out the 30 minute program on a topic which has caught the attention of the world. Follow Lucia Chavez, chief nutritionist and Dr Ortiz as they tackle a subject which is still developing as probably one of the main causes of health and disease in modern society.

In this week’s video, we talked about a gutsy topic. We learned that we are basically only 10% human, and 90% bacteria!

The microbiota should not be seen as foreign to our body, but rather as having co evolved with our gut. “It has been estimated that the microbes in our bodies collectively make up to 100 trillion cells, ten-fold the number of human cells, and suggested that they encode 100-fold more unique genes than our own genome. The majority of microbes which reside in the gut have a profound influence on human physiology and nutrition and are crucial for human life (Qin et al., 2010).  So, if we want to have a healthy gastrointestinal (GI) tract, we have to feed our “good” bacteria and make sure to keep it happy.  The microbiota’s metabolic complexity can be compared to the liver’s.  It provides metabolic activity that greatly benefits human health by basically doing two things: providing essential nutrients and maximizing the efficacy of energy harvest from the food we eat. We can even say that it is much like a metabolic “organ,” having an impact on nutrient acquisition, energy homeostasis, and body weight. Nonetheless, if we don’t keep our ‘good bacteria’ happy, it could actually end up harming us and making us prone to disease.

“Microbiota also contains numerous potential opportunistic pathogens and thus has the potential to harm its host if this complex microbial community is not well managed” (Chassaing, Etienne-Mesmin, and Gewirtz, 2013).

We know the main functions of our GI tract: digestion, nutrient absorption and acts as a physical barrier. It also has an impact in immune response and it´s related to mood, depression, skin and brain health.

“another extremely important function of this organ is its ability to regulate the trafficking of macromolecules between the environment and the host through a barrier mechanism.” (Fasano and Shea-Donohue, 2005)

What happens when our gut can’t function properly as a barrier? Symptoms like cramps, diarrhea, bloating, nausea, and bleeding have been associated with alterations in intestinal permeability and decreased gut barrier function. The increased GI permeability, a ‘leaky gut’, also leads to endotoxemia, which is basically the presence of toxins in the blood, and results in increased susceptibility to infectious and autoimmune diseases, due to absorption of pathogens and/or toxins into tissue and bloodstream. “The integrity of tight junctions depends on sophisticated interactions between the gut residents and their expressed substances, the intestinal epithelial cell metabolism and the activities of the gut-associated lymphoid tissue” (Lamprecht and Frauwallner, 2012).

As mentioned in our video, anything that causes inflammation in the gut is considered an attack. We might not feel or notice it at first, but if these ‘attacks’ are common, inflammation will result in a chronic disease, not always localised but with symptoms like joint pain, brain fog, fatigue, altered hormonal processes, and more. “When combined and preserved, immune surveillance and barrier’s selective permeability, the host capacity of preventing the development of intestinal inflammation is optimized, and viceversa” (Pigrau et al., 2015)

“The gut mucosa is constantly challenged by a bombardment of foreign antigens and environmental microorganisms. As such, the precise regulation of the intestinal barrier allows the maintenance of mucosal immune homeostasis and prevents the onset of uncontrolled inflammation. In support of this concept, emerging evidence points to defects in components of the epithelial barrier as etiologic factors in the pathogenesis of inflammatory bowel diseases (IBDs). In fact, the integrity of the intestinal barrier relies on different elements, including robust innate immune responses, epithelial paracellular permeability, epithelial cell integrity, as well as the production of mucus.” (Pastorelli et al., 2013)

So, what causes inflammation? The main elements that cause inflammation are sugar, toxins and chemicals.

The accumulation of these artificial and man made products is called “toxic load”. Toxins and chemicals that are absorbed by our body have a negative impact in our organ functions.

There is growing evidence that this is playing an important role in brain health, obesity and autoimmune diseases.

“Autoimmune diseases are characterized by tissue damage and loss of function due to an immune response that is directed against specific organs…from impaired intestinal barrier function.” (Fasano, 2011)

“Moreover, alterations in gut microbiota, increased intestinal permeability, and metabolic endotoxemia likely play a role in the development of a chronic low-grade inflammatory state in the host that contributes to the development of obesity and associated chronic metabolic diseases such as nonalcoholic fatty liver disease.” (Frazier, DiBaise, and McClain, 2011)

“When the finely tuned trafficking of macromolecules is dysregulated in genetically susceptible individuals, both intestinal and extraintestinal autoimmune disorders can occur.” (Fasano and Shea-Donohue, 2005)

“interactions between the gut microbiota and their genetic predispositions or dietary changes may be key factors that contribute to obesity and other metabolic diseases.” (Xu et al., 2016)

“The prevalence of asthma and allergic disease has increased worldwide over the last few decades. Many common environmental factors are associated with this increase. Several theories have been proposed to account for this trend, especially those concerning the impact of environmental toxicants. …. in the activity of the immune system,” (Yang et al., 2014)

“the obese microbiome has an increased capacity to harvest energy from the diet. Furthermore, this trait is transmissible” (Turnbaugh et al., 2006)

“the relevance of abnormal permeability to disease…an emerging paradigm regarding the genesis of autoimmune diseases” (Arrieta, Bistritz, and Meddings, 2006)

“Dysfunction of the brain-gut-microbiome axis may induce the loss of gut mucosal homeostasis, leading to uncontrolled permeation of toxins and immunogenic particles, increasing the risk of appearance of intestinal inflammation, mucosal damage, and gut disorders.” (Pigrau et al., 2015)

“the gut microbiota plays a significant role in the development of obesity, obesity-associated inflammation and insulin resistance. In this review we discuss molecular and cell biological mechanisms by which the microbiota participate in host functions that impact the development and maintenance of the obese state, including host ingestive behavior, energy harvest, energy expenditure and fat storage.” (Shen, Obin, and Zhao, 2012)

Today, children are exposed to more toxins and chemicals than past generations, this exposure from their pajamas to the food they eat, increases their toxic load throughout their life. Children are much more vulnerable, and their toxic load may be higher compared to the size of adults putting them at future higher risk of disease. Toxic load leads to inflammation, and inflammation is the root cause of chronic diseases.

“Research in the recent decades revealed that it is indeed the lack of early childhood microbial exposure, increase use of antibiotics, as well as increase consumption of processed foods high in carbohydrates and fats, and lacking fibre, which wreak havoc on the proper development of immunity and predispose the host to elevated inflammatory conditions. Although largely unexplored and under-appreciated until recent years, these factors impact significantly on the composition of the gut microbiota (a collection of microorganisms that live within the host mucosal tissue) and inadvertently play intricate and pivotal roles in modulating an appropriate host immune response.” (Shen and Wong, 2016)

We know it is not easy to make radical lifestyle changes overnight, but we can take small steps to reduce the toxicity that surrounds us, and more importantly, use food to reduce our toxic load instead of increase it. We can choose to eat less added sugars, less processed foods, more organic foods, growing your own food, drink more water and reduce our daily contact with plastic. We have to take care of ourselves; we have to pay attention to our environment and the actions we can do in a daily basis to avoid toxins.

Ackermann, W., Coenen, M., Schrödl, W., Shehata, A. and Krüger, M. (2014) ‘The influence of glyphosate on the microbiota and production of botulinum neurotoxin during ruminal fermentation’, Current microbiology., 70(3), pp. 374–82.

OCC’s epidemiologist is closely monitoring the COVID-19 status and is actively issuing updates as they are available. The Centers for Disease Control and the World Health Organization are the most trusted sources online.  While the CDC has announced new mask protocols for vaccinated individuals, there will be no changes for our office protocols for patients, guests, and staff members as the announcement does not apply to hospitals or medical facilities. Masks are still a requirement for all patients, guests and staff at our facility.

As we reinitiate weight loss surgery, we are constantly adapting and installing new and updated safety measures.

Bariatric Surgery and the clash of two pandemics.

Major metabolic and bariatric surgery Societies and colleges globally are now calling for the safe resumption of bariatric and metabolic surgery before the COVID-19 pandemic is declared over.

The sooner bariatric surgery can be safely performed, the quicker obesity, type 2 diabetes, and other diseases can be reduced or resolved as they are not only chronic they are also progressive.  Obesity is also linked to more than 40 diseases including type 2 diabetes, hypertension, heart disease, stroke, sleep apnea, osteoarthritis, and at least 13 different types of cancer.

A recent statement from the ASMBS says “Before COVID-19 began, it was clear that patients with obesity were ‘safer through surgery.’ In the era of COVID-19, ‘safer through surgery’ for patients with obesity may prove to be even more important than before.” Obesity and Metabolic syndrome have been identified as an independent risk factor for adverse outcomes including death among COVID-19 patients.

Contact Us
Contact Us
Accessibility: If you are vision-impaired or have some other impairment covered by the Americans with Disabilities Act or a similar law, and you wish to discuss potential accommodations related to using this website, please contact our Accessibility Manager at 866-376-7849.
Contact Us